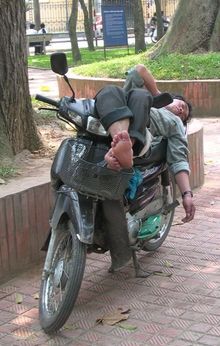 I stood just outside the storefront, leaning against the door frame waiting for a delivery. On the fractured sidewalk in front of me, a man napped on the seat of his motorbike, his arms folded across his chest, his legs draped over the handlebars. Settled into his daytime slumber, he was cocooned from the mad cacophony of the street, where masses of motorbikes tipping with payload, sped about in all directions, dismissive of signs, signals, or even an iota of order.

Looking at him, so unaffected he could nap amid the free-for-all, I was once again stunned by the fantastic bedlam of Vietnam's "moto" culture; a bedlam that is simply white noise to locals.

I watched as several motorbikes bumped up onto the sidewalk, nimbly dodging the droves of pedestrians and turning this city sidewalk into a traffic feeder lane. Out of the stream emerged a "moto" driver laden with boxes of computer equipment, who wove his way around the napper and the other sidewalk sideshows. He appeared to be driving toward the doorway I was standing in. I was curious, wondering when this driver would stop, or if he would stop. I quickly sidestepped to make room for him as he eased the bike over the threshold, only arriving at a full stop once inside the store. For a foreigner, this was breathtaking. For the Vietnamese, it was a plain-vanilla-ordinary thing to do.

To the Vietnamese, a motorbike is not just a vehicle, but a bionic limb. A magic carpet. A personal jet pack, able to propel them from their living rooms (where many park their bikes) to any doorstep. Legs and feet are backup forms of transport, used only as a last resort.

And packs of motos swarm through the streets and onto the sidewalks, weaving and honking, dodging and turning, often hulking with the likes of plate glass, doors, household appliances, and even amusement park props in tow.

The number of motorbikes continues to rise in Vietnam and there are now nearly 20 million of them, according to the World Bank. Ho Chi Minh City (formerly Saigon) has 3 million – about one motorbike for every two people in the city. By far, the largest portion of vehicles on the roads of Vietnam are motos, which are small engine motorcycles.

I had my first extended stay in Vietnam more than three years ago. Day after day, I'd watch - through taxi windows - the dizzying theater of street traffic. From my backseat perch, I'd jot notes to myself about the two- and three-wheeled vehicles minnowing around me, heaving with cargo – coconut-laden rickshaws; old bicycles bulging with baskets of raw meat; cyclo drivers pedaling oversized spools of cable wiring; and motorbike after motorbike weighted down with six-foot bookcases, stereos, refrigerators, extension ladders, TVs, bushels of skinned chickens, plastic barrels of live fish, and rings of rubber tires.

These superheroes of delivery would transport items the size of small buildings on nothing bigger than a Vespa. Cars can barely crawl along the clogged city streets, but the river of motos and makeshift vehicles flow speedily around them. From my view inside the taxi, I felt like an onlooker who’d been plopped down into the middle of a parade.

A US State Department warning reads like an all points bulletin, cautioning Americans against murderous motorcycles on the loose: "The traffic moves on the right, although drivers often travel against the flow. Horns are used constantly, often for no apparent reason. Outside the cities, livestock compete with vehicles for road space. Drivers do not follow basic traffic principles and there is little adherence to traffic laws … most Vietnamese ride motorcycles; often an entire family rides on one motorcycle."

Near the end of those first weeks in Vietnam, my interpreter, Mr. Thien, convinced me it would be OK to catch a ride with him on his moto.

I climbed on and gripped his shoulders. Before Thien had driven half a yard, we were front-ended by a moto making a turn into oncoming traffic. It was nothing more than a kiss of wheels, and both drivers nodded respectfully at each other before the second driver sped off, soldiering into the surge of oncoming vehicles.

Although the cities rack up a considerable number of collisions, the country's highways are even worse. (Eighty percent of the world's traffic accidents take place in Southeast Asia, according to the World Health Organization.)

Yet, the Vietnamese seem unfazed. Their madness for motos remains, along with their kamikaze abandonment of road rules and safety. Late last year, a law mandating the use of helmets went into effect. Before then, seeing a helmet here was like spotting an alligator in the Arctic. And although citizens comply with the law, there remains an aversion to wearing helmets. Which is why they're mockingly called rice cookers.

Since that first visit to Vietnam, I've returned several times. In June, I walked out of my hotel one afternoon to find an Australian guest sitting on the steps, staring out at the street.

"Unbelievable. Unbelievable," he said. "I had plans to go out tonight, but, I’m not going anywhere. I’ve been sitting here for more than an hour and I just can’t take my eyes off it."

I scuttled on past the dumbstruck Australian and handily flagged down a moto taxi driver. He revved his engine, popped up onto the sidewalk and braked at my shoes. His toe-front service meant he was extending his superpowers to me, ensuring I wouldn’t have to take one single extra unnecessary step. I got on, strapped my 'rice cooker' across my chin and we were off.

I don't know where it came from, this willingness to lob myself into the frenzied fray. But it happened on my second trip to Vietnam, when a late-night ride home was offered by a fellow journalist. It seemed rude to say no. And too touristic and foreign and fearful to call for a cab, yet again. And the chorus of locals egging me on sealed the deal. "Don’t be scared! We take care of you!" they shouted.

On foot I felt like a trespasser in a supremely crowded living room. On wheels, I began to loosen my grip. My posture softened. No longer bracing against the current, my spot on the back of the moto felt like the eye of the storm. I began to take motos whenever possible. I crisscrossed the city on moto taxis, just one more piece of cargo being ferried through town. This was it for me. I was joined with the masses. Me as we.

Zipping along, I watched as fellow motorbikers clipped past me. I began to note with pad and pen, there on the back of the bike, what I saw in motion: a family of four on a moto passing around a bucket of fried chicken, a stack of funeral wreaths being hauled, a driver with a huge bucket of live shrimp sandwiched between his legs.

I shot video while my driver u-turned into oncoming traffic on a bridge, then rewound to look at the footage, while other motos whizzed so close I had to squeeze in my knees.

Looking back, I'm alarmed at the danger I put myself in. Being bionic by proxy involves more than a little risk.

Propped on a mantel in my office half a world away, is my helmet. Every now and then I take it down and try it on, showing it off to friends and telling them stories of the road. Me and my superhero costume, nestled safely at home.