Home is Where the Heuriger Is 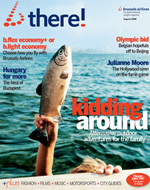 He closes his eyes, reaching for a long-forgotten memory. It starts as a snapshot of a small boy with a white apron fastened around his tiny waist. The four-year-old carries a tray out to a shady terrace, snaking his way through the crowd of customers to collect empty glasses and pocketfuls of tips from the locals, who are adoring of the hard work and charm of little Hannes Schoderitz. The terrace is still shaded under the covering of grapevines laced across wooden beams, creating a roof of thickened greenery. Schoderitz, now 27, plants himself on a bench at the end of a long wooden table, leaning forward and then back, tapping his fingertips together, searching for the words that will properly convey what it means to have grown up among the Austrian vineyards and the vintner traditions that have defined his life. "What can I say? I travel, sure, but when I come back, this is my home," he says, looking around at the Sunday swarm of families and friends who have come to drink his father's wine and swap stories on what has turned out to be a wickedly hot afternoon. The wine cellars in this bucolic countryside are clustered along winding gravel paths abutting the vineyards, the hobbit-size of the cellars concealing the grand tradition they contain within. Schoderitz is a third-generation winemaker, a custom first employed by his grandfather 100 years ago. The elder Schoderitz opened the family heuriger, a type of wine tavern known only to Austria. Except a heuriger is not a tavern. Not exactly. Heurig is a uniquely Austrian word meaning "this year's" and a heuriger is a place where winemakers showcase their young wine. As is fitting for a country tipsy with rules, the heuriger is governed by what can only be described as a constitution. This set of puzzling schedules, musical scores and menu models can mystify and fascinate tourists. And watching a local explain it to them is like watching an American explain baseball to a Brit. "I wonder about how to find out when they're open, or which ones are open," says Christine Hofmann, a German tourist visiting Schoderitz's heuriger in a village about 25 miles east of Vienna. More than 200 years ago, Emperor Josef II liberated Austria's winemakers from heavy tariffs and opened them up to a little bit of competition, but only a little bit. Thus, heurigen were born, allowing winemakers to sell their wine, but only for a limited time each year. The heuriger season lasts about four months, but competing heurigen can't open for business at the same time. "We're allowed to be open three times a year," says Schoderitz, explaining that a local council decides the schedules, based on a system of rotation. "We're open for two weeks each time." Locals are clued in to the schedules by word of mouth, by checking bulletin boards in the town square or by the fir twigs hung above the heuriger’s entrance signalling guests are welcome. If the fir twigs aren't there, move along. For tourists heading out among the vineyards, an open heuriger is easy to spot. It's the place where dogs are lying lazily under benches, servers are hustling from table to table, and the din of conversation rings out through the sleepy countryside. Heurigen are only allowed to sell their own wine. Asking for a beer or other type of liquor will get you something of a snigger – on a good day. Wine is sold by the glass or pitcher, not by the bottle, and Austrians favour spritzers (half wine, half soda water), a refreshing combination on a hot summer's day. Food is also strictly controlled. Only light fare is allowed, limited to breads and spreads. Piped-in music of any kind is strictly forbidden. Live music is saved for the more touristy venues, and even then is limited to a guitarist and an accordion player belting out tunes of romance and praise for old Vienna. Austria is a nation of drinkers; it isn't unusual to see beer being ordered with breakfast, or even instead of breakfast, for that matter. But it's different in a heuriger. "It’s hard to explain, but people don’t come here to get drunk," says Schoderitz. "It's a family atmosphere. The point is to be together." And for many vintners, winemaking is a hobby rather than a livelihood, where the cultivation of small plots is a custom passed down through the generations. Schoderitz's grandfather started the heuriger in 1909, saw it through two devastating world wars and the crippling post-war occupation by the Russians that lasted for 10 years. His father has tended the single hectare since he was a young boy, and raised his son and daughter to do the same. "This is part-time work for us," says Schoderitz, who is an investment analyst in Vienna. "It's hectic, but at the same time it’s relaxing. I get my mind off work when I’m here." He sits back, just one among many who are under the shelter of his family's heuriger and in the comfort of each other. "I know I’m among friends here."