In Austria, the Sound of One Finger Pulling 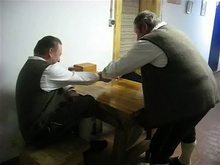 Three Lederhosened Salzburgers stand outside in the quiet of a tiny Alpine hamlet in Austria. One of the men folds his arms across his sturdy belly, sure and strong. His son next to him mimics his father's stance, and both seem aware of the imposing power they possess. The third man, his head topped with a traditional Tyrolean hat, breaks the winter quiet with the cracking of a joke involving something to do with schnapps. After some hearty laughter that shakes off the sleepiness of the place, they all three lumber down into a damp cellar to practice pitching each other across a wooden table using the strength of one single finger. The men are training to become champions of finger wrestling, or fingerhakeln, a little-known, ancient Alpine sport with a long and robust history. This is not thumb wrestling, arm wrestling, wife carrying or log rolling, but a sport that Austrians and Bavarians take quite seriously. Tournaments are held frequently, with the next one coming up on March 29. Georg Baumann has turned part of the cellar in his family home into a makeshift fingerhakeln gym. Next to the stairwell, the 53-year-old machinist keeps an orange metal recipe box jammed tight with handwritten records of every Austrian fingerhakeln battle that has gone down during the last 30-plus years. He flips to 1977. "Here's Georg Wimmer's records," says Mr. Baumann. "He won more than 1,000 competitions. One of our all-time champions." Mr. Baumann takes out the worn, ink-smudged card, which has been painstakingly filled in with dates of Mr. Wimmer's wins and losses. Mr. Baumann brought his son into the fingerhakeln fold as a small boy. Now at 18, Georg Jr., is accumulating his own win/loss record, with a card in the orange box to prove it. A fingerhakeln match goes something like this: Two opponents, usually clad in lederhosen (or dirndls, for the damen fingerhaklers), sit across from each other at a wooden table. The wrestlers each lock a finger (usually the middle one) through a leather band roughly the size of a bracelet and start to pull. The table is marked with black lines showing how far the wrestler has to pull his opponent before he can be considered the winner. The loser is sometimes yanked entirely across the table, landing noisily in a heap on the other side. Villages lend space in their town halls for training, and bars have been known to be particularly accommodating, but Mr. Baumann gets a crowd of about a dozen who meet weekly at his house, and more often in the days before a match. Some get busy crushing tennis balls with their hands. Others do finger pull-ups, or heave ridiculously heavy stones hoisted with a pulley. "It's also good mental training," says Gottfried Eder, a 63-year-old chemical plant retiree. Mr. Eder, whose wife, son and grandson are also fingerhaklers, has outfitted his own garage with a 90-kilo stone that the finger-wrestling family likes to take turns pulling. All that pulling can make a finger massive, and some get to nearly twice their normal size. Injuries are a danger, even in a sport that requires the use of only one digit. "Torn tendons and fractures are not uncommon," says Mr. Eder. "Fingers do get bloody."