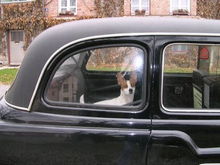 Remi the Jack Russell, awaiting a ride in Sir George, the Black Cab

McCracken spent 15 years in the newsrooms of the St. Petersburg Times (now Tampa Bay Times), USNews & World Report and the Chicago Tribune before striking out on her own in Europe. She was twice a Knight International Press Fellow.

She seeks out the story behind the fray of the headlines, and has written eloquently and expertly on everything from the pain of post-war Bosnia, to the struggling Republic of Georgia, the club of female serial killers in Hungary, the last remaining leper colony in Europe, and the marvelous madness of the streets of Saigon.

Her first book, a historical true crime--The Angel Makers--will be published by HarperCollins in spring 2023. She is represented by The Gersh Agency.

(McCracken lived in rural Austria for seventeen years and recently returned to the USA. She currently resides on Martha's Vineyard.)

Want to talk to McCracken about an assignment for your publication? Get In Touch

Find out more about McCracken's Training, Consultant and Corporate Work